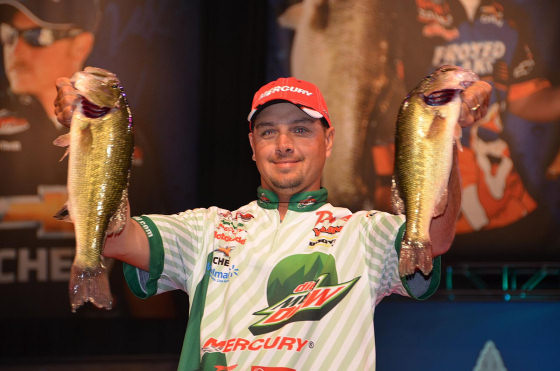 In second place is Park Hill, Okla., pro Jason Christie, who caught a limit of largemouths worth 18 pounds, 1 ounce. A noted shallow-water fisherman, Christie was extremely thankful for the change in weather.

“It played right into my hands,” said the Lake Hartwell champion. “I had one of my worst practices ever. But today I was able to just go fishing like I do back home. When you get wind and rain on a clear lake like this, they bite.”

Christie described his pattern as junk-fishing. He threw topwaters quite a bit, but that wasn’t his only bait.

“I fished both deep and shallow. Now I know what I’m looking for, but I don’t know where they’re at. As soon as I get home I’ll be looking at a lake map.”

While several pros struggled with keeping fish buttoned up, Christie never lost one.

“I didn’t catch a lot of fish, but I got the right bites. But to be sitting in second, I’m as shocked as anyone.”

Christie's wire-to-wire win airs May 8 on Versus

Diet Mountain Dew pro Jason Christie is in charge on day one of the Walmart FLW Tour event on Lake Hartwell with a five bass limit topping the scales at 22 pounds, 4 ounces. (Photo by Rob Newell)

Diet Mountain Dew pro dominates Lake Hartwell tournament
05.May.2011
MINNEAPOLIS — South Carolina’s Lake Hartwell served as the venue for the third Walmart FLW Tour event of the season. And while Hartwell is known for its clear water and blueback herring, pro Jason Christie ignored both and chose to explore the shallow, stained water in Beaverdam Creek. Fishing to his strengths, the Oklahoma native said he felt right at home slinging spinnerbaits to isolated pieces of cover. The result was a dominating wire-to-wire win, his first on Tour. Complete coverage of the event will air May 8 from 1-2 p.m. ET on VERSUS as part of the weekly “FLW Outdoors” program.

This winning thing is becoming a habit for Jason Christie.

The 37-year-old former teacher and basketball coach from Oklahoma won his first tour-level event just a month ago when he topped the Hartwell FLW Tour Major in South Carolina. Last week he did it again, prevailing over a field of 48 qualifiers and invitees at the inaugural PAA All Star Series event at Lake Ray Hubbard in Texas.

The 4th-year pro took command of the tournament with an event-best 25.33-pound sack on day 2, then backed it up with an 18.33 final-day stringer to outdistance runner-up Todd Auten by slightly less than 4 pounds.

Here's how he did it.

Like the majority of the field, Christie had never been to Ray Hubbard before. The impoundment, which covers less than 23,000 acres at full pool, is rife with quality fish, but they tend to be congregated at one end or the other (either the dam or up the river).

He had to start his practice somewhere, so he chose the dam end.

Christie signed up for the BoatUS Angler Weigh-to-Win tournament incentive program. It’s pretty easy to do, and Christie pocketed an extra $500 for participating and winning. He also picked up a bonus in March, as did PAA members Jimmy Mason of Alabama, Stephen Browning of Arkansas, Edwin Evers of Oklahoma, Russell Cecil of Texas and Rob Digh of North Carolina.

Getting signed up is pretty easy, too. Just visit BoatUSFishing.com or call (877) 584-2628 or (918) 742-6424 to purchase an affordable Unlimited On the Road or On the Water BoatUS Angler towing membership. Then plug your membership number into the Weigh-to-Win registration form, and you’re ready to go.

18.35 Sack Seals It
Oklahoma's Christie Makes It 2 Wins In 2 Months

Jason Christie's 2011 season hasn't been extremely consistent to this point. But when he's been good, he's been spectacular.

The Oklahoman weighed an 18.35-pound sack today to win the PAA All Star Series event at Lake Ray Hubbard in Texas with a 3-day total of 61.93. It was his second triumph in less than a month – he topped the Hartwell FLW Tour major in late March.

Todd Auten, the day-1 leader, caught a day-best 21.60 today to finish as the runner-up after starting the day in 5th place. His 57.95 total was just under 4 pounds shy of Christie's.

Matt Reed and Ott DeFoe each surrendered one position in the standings today and ended up 3rd and 4th, respectively. Reed boxed 16.54 for a 56.80 total and DeFoe caught 17.95 for a 56.05 aggregate.

Christie threw a green pumpkin Booyah jig with a Yum Money Craw or Craw Papi trailer on 25-pound Silver Thread fluorocarbon all week. He fished up the lake at the convergence of two rivers and in the East Fork Trinity River.

Christie Surges into All Star Lead!

Christie Surges into All Star Lead!

“It was one of those days when it seemed like I could pull in anywhere and catch one,” Christie said.

His catch started with a 5-pounder Friday morning and then an 8.37 pounder that sits as the tournament’s big bass. Southern winds up to 25-30 mph battered the lake but Christie said he believes that helped him.

“I think it positioned the fish in the shallow drains a little better,” he said. “I’m just throwing a Booyah jig and spinnerbait, and covering water.”

Nitro pro Matt Reed of Texas is on his heels with 40.26 pounds after another consistent day. Reed caught a limit early, then his biggest that weighed 6.54 pounds and “culled a little bit the rest of the day, but didn’t get another big bite.”

The PAA All Star Series featured 48 of the world’s best anglers in a fight to the championship. The best athletes in the sport helped comprise the field, qualifying through the 2010 PAA Tournament Series standings or as special invitees. Up for grabs is $100,000 in cash and a new Nitro Z-8 boat outfitted with a Mercury 225 and T-H Marine Atlas jackplate, along with a Minn Kota Talon shallow water anchor for the tournament’s big bass winner.

Lake Ray Hubbard and the city of Garland welcomed major league fishing here for the week. The no-entry fee All Star Series event is part of the evolution of the sport and something anglers have wanted for years. Bass Pro Shops on I-30 is the site for the morning launches, at 7 a.m., and afternoon weigh-ins, at 3 p.m.

From the field that featured numerous tournament winners, FLW, PAA and B.A.S.S. Anglers of the Year and champions, the final 12 pros sport an impressive resume.

Christie claimed the FLW Tour title at Lake Hartwell in March, while Reed is coming off a Top 12 cut last week in the Bassmaster Elite Series at Toledo Bend. Nitro pro Ott Defoe of Tennessee leads the Bassmaster Rookie of the Year standings.

The Top 12 who will fish Saturday:

Christie made the run up Hubbard to two tributaries and the juncture of those where the current, vegetation and cover attracted a handful of All Star pros.

He’s working a one-two punch of an early-morning bite in that area before going into the Trinity River to flip cover. Whether it was pressure from the first day or weather, or both, the bite didn’t materialize early on Friday.

“I struggled until about 9 a.m. and then caught that 5-pounder,” he said. “Then I caught the big one and was shaking the rest of the day. You don’t always start your day with a big one like that. I left that area and it seemed like wherever I went, I could catch one.”

Christie’s 25.33-pound limit is the biggest of the tournament and on par with predictions from locals. But that surge didn’t occur this week like expected. The wind is playing a role in that, along with the bass spawn that is tailing off a bit.

At least two other All Star finalists are in the same area. Along with Saturday locals, it could be a grind.

Read the rest on PAA.

You can't fight Mother Nature, so you might as well make the best of what she gives you.

Oklahoma FLW Tour pro Jason Christie took over the lead today at the PAA All-Star Series event at Lake Ray Hubbard in Texas as he boxed 25.33 pounds to give him a 2-day total of 43.58. He took advantage of the ferocious wind, which blew so hard that it created an artificial current in the area he was fishing and positioned the bass in placers where they were easier to catch.

Diet Mountain Dew pro claims first Walmart FLW Tour win on Lake Hartwell
27.Mar.2011 by Brett Carlson
GREENVILLE, S.C. – Many professional anglers go their entire career questioning if they’ll ever win a tour-level bass tournament. But for Jason Christie, a fisherman of immense talent, it was never a question of “if” but “when.” When turned out to be the third Walmart FLW Tour qualifier of 2011 on Lake Hartwell.

Four times in his career Christie has led an FLW Tour event, only have to have it slip away for one reason or another. In 2009, he led the Beaver Lake tournament heading into the final day only to fall to fourth. But Christie never doubted his breakthrough win would come and neither did those who know him well.

Jason Christie almost up and left the spot that had treated him so well across the first 3 days of the Hartwell FLW Tour Major in South Carolina. He worked through the area once and didn't get a bite on his spinnerbait.

But then at 9:30 he made a little change to an adjacent creek and boated his first fish. It had pulled away from the bank, presumably because of the cold water dumping into the lake from the frigid rainstorms. That fish convinced him to stay and he rode the area to another solid limit and a wire-to-wire victory – his first at the tour level.

Christie in command with 6 pound lead

The rain came down and the pollen blew, which made sight-fishing all but impossible today at the Hartwell FLW Tour Major in South Carolina. It helped the spinnerbait/jerkbait bite though, and Oklahoma pro Jason Christie threw the blade for most of the day. He roped 13-06 – his lightest limit so far after back-to-back 20-plus sacks – but easily retained the lead.

Christie's lead did dwindle a bit though. He started the day 9 pounds ahead of Wisconsin pro Tom Monsoor. But Monsoor weighed 16-06 on a jerkbait, the heaviest limit of the day by far, and pulled 3 pounds closer to Christie.

Stacey King leads the quartet of pros who also made the Top 10 a few weeks ago at Beaver. King, who finished 2nd at Beaver, is blind-casting in a dirty-water bedding area and weighed 13-02 today. The healthy catch bumped him up two places to 3rd.