Jason finishes 7th at the Classic 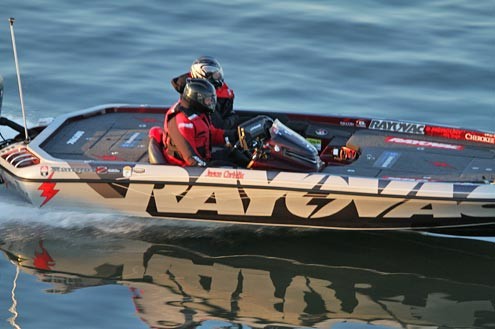 Story and Photos by Lawrence Taylor 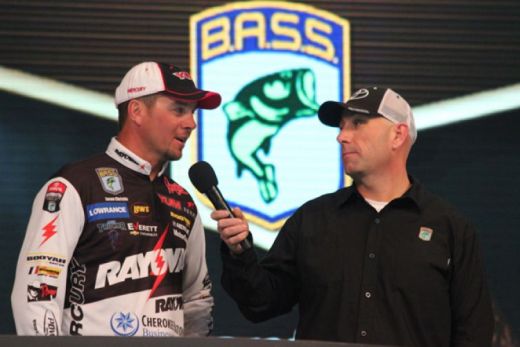 Jason Christie's wild adventure ended today with a seventh place finish in the 2013 Bassmaster Classic. There may be a few fishermen alive who could make such a journey, but a miniscule number of those would be capable standing on stage during the final moments of the Classic. Only one did, and he should be proud.

His plan was hair-brained from the start. To qualify for the Bassmaster Classic by taking a long shot of winning one of three Open tournaments (must fish all three to qualify). The only Open trail that fit his schedule were the Northern Opens, held in New York and Detroit and other far-north destinations where fish are brown instead of black and most folks are more interested in catching long, skinny, toothy fish that fight like you were pulling in a willow limb.

This was his plan, with the ultimate result getting to fish the Classic on his home lake.  Let's see, head to unfamiliar lakes to compete against other pros and locals who grew up on that water and call it their home lake, and beat them, so you can come home and fish against a bunch of other pros and a few other locals on water you grew up and call your home water.

Christie nailed the second Northern Open he fished. Classic done got qualified for.

He liked fishing the Opens so much he fished a Southern Open close to home just for fun, and he won that one, too, just to rub it in. Without the rule that an angler must fish all three of the tournaments to qualify for the Classic, he would have been a double-qualifier in his first attempt with B.A.S.S. 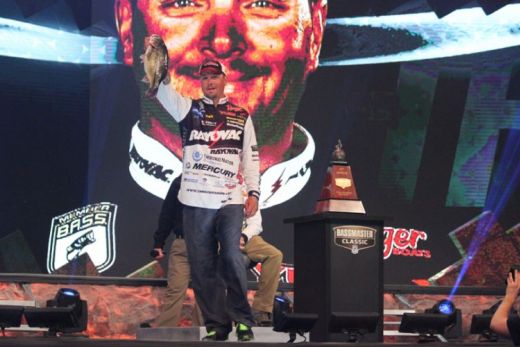 (Above: Christie shows off big bass of the day.)

The second part of the plan was to put it to 53 of the best fishermen in the world on his home lake. If it was a geography test about the lake, or maybe a Grand Lake O' The Cherokees trivia contest, it would have been no problem. But this is bass fishing, where brilliant anglers take lessons learned on lakes throughout the country and ply them on yours, and sometimes they beat you. Those folks up there on the Detroit River know that. Jason knew it, too.

Only one Classic Champion has ever won in his home state.

Christie fought with a Smithwick Rogue and a Bomber 5A and stayed within striking distance. Scott Pace got the bigger bites the first two days, and a few other anglers did pretty well, too. Day two he slipped, but so did most anglers, minus Cliff Pace, who brought in his second almost-22-pound limit. To have a shot, Christie fished the last day on memory, electronics off, doing what he does best at Grand, while Pace was faltering. Unfortunately the anglers between him and Pace did well.

Today he only brought in four fish, but one of those was big-bass of the day at 6-pounds, 3-ounces. Four more of those and this becomes a different story, but the three brought to the scales weren't the ones he needed. 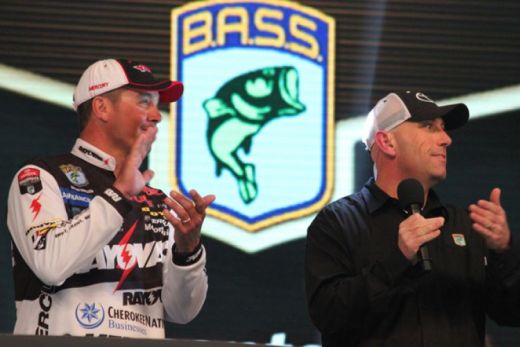 (Above: Applause for Ali!)

The hometown hero, local hot rod, Grand Lake Big Stick, garnered more than his share of publicity this week, and what he won from this tournament is worth far more than even the Championship prize money totaling $500,000. He introduced himself to the B.A.S.S. Elite as a powerful angler, to Oklahomans as another Okie to be proud of, and to the 15,000-strong crowd of the BOK center as the father every child wants when he stopped the show to have everyone give his daughter a hand for winning the 8th Grade Oklahoma State Basketball Championship Saturday night.

Christie will fish both the FLW and B.A.S.S. Elite tournament trails this year, which kick off in just a few weeks. Jason Christie's wild adventure began today with a seventh place finish in the 2013 Bassmaster Classic.