What were your expectations heading into the day?
"I really didn't expect what I had in the livewell to weigh as much as it did.  I figured I had around 16 or 17 but these Grand Lake fish are so healthy they end up weighing more than you think."

Was there a key moment for you during the day?
"Catching my biggest one on my third cast was key.  That got me fired up and I caught another one about three and another two pounder, so that was nice to get off to a quick start."

What was the most challenging/surprising aspect of your day?
" I lost one about four and a half pounds that I actually had in my hands and then I didn't get a bite for about three hours, so that was kind of a challenge.  Running down the lake and stopping where I have history was very challenging to me.  I just can't bypass those places, and hopefully I will pull up on one and it will pay off."

How would you assess your decision making and execution on the water?
"I made one wrong decision today after I caught what I had instead of going down to where I planned on fishing I decided to stay in my general area and hit places I know trying to catch a big one.  I didn't see many boats today so I figured they were down where I had planned on fishing, so I decided to stay up and it didn't work out."

“I really didn’t think I had that much weight, to be totally honest. I didn’t get many bites, but I did lose a 4 1/2-pounder—I had her in my hands and she came unbuttoned. Early in the morning, I caught a few good fish that really helped calm my nerves and allowed me to fish better.

“The biggest struggle for me is not fishing history. I can run all over this lake and show you places where I’ve caught big fish. I’m doing everything I can to fish the moment and block out all the crazy ideas I’ve had.

“I’m calm as a cat right and I really appreciate all of the spectators and support. It’s a really cool thing.”

Grand Lake lives up to its name on Day One 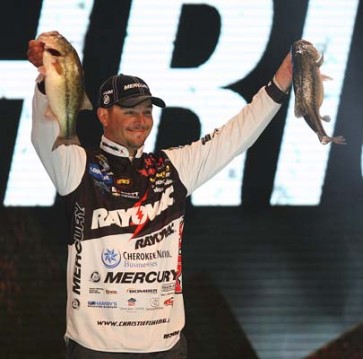 TULSA, Okla. — Wild expectations changed into high probabilities overnight at Grand Lake on Day One of the Bassmaster Classic. When three anglers topped 20 pounds, the dream of averaging that weight over three days became near-reality.

"I think it's going to take 20 pounds a day to win it," said Kevin VanDam, the four-time Classic champion, who is in fourth place with 19 pounds, 12 ounces. "There are so many big fish in this lake; 25 pounds (a day) happens all the time here."

Chris Lane, last year's Classic champion, zeroed on Day One, but he saw enough from others to have an opinion on the outcome.

BassFan caught with the nine rookies at media day to get their first Classic recollections and what it means to them to competing in the sport’s premier event.

“Having friends of my family that were fishing in a lot of them, it really hit home. Guys from around here like Tommy Biffle and Jimmy Houston, they grew up fishing with my family so knowing somebody personally that was in the Classic and that you’re rooting for gave you a different idea of the Classic than a normal fisherman or spectator would have.”