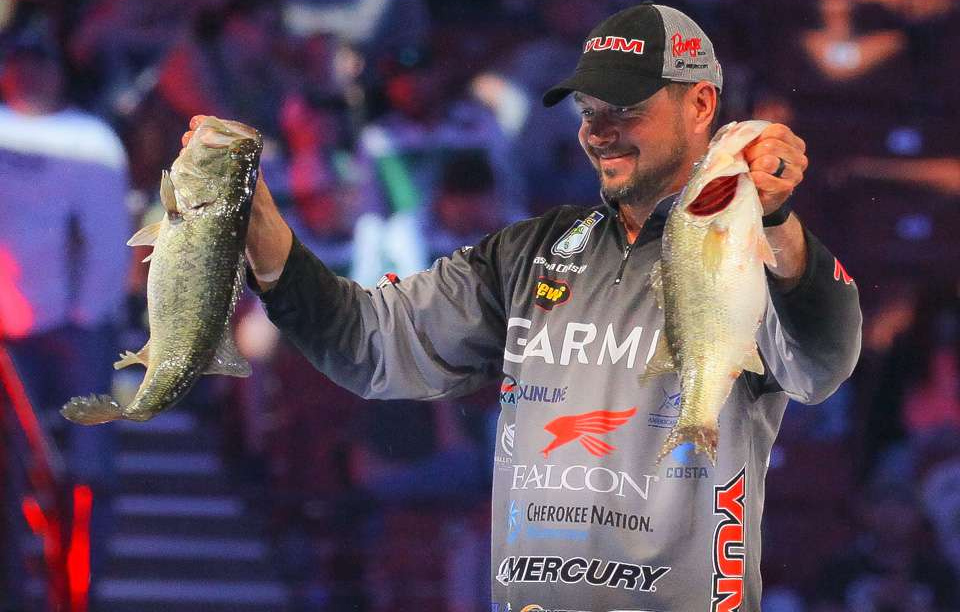 It's shaping up to be quite a month for professional anglers from the state of Oklahoma.

Christie, who finished 2nd to traveling partner Evers two years ago at Grand Lake in their home state, caught day 1's lone 20-pound stringer. His 20-14 haul gave him a 1-05 advantage over Evers and a larger edge over a strong initial top 12 that includes defending champion Jordan Lee, along with former Forrest Wood Cup champions Brent Ehrler and Jacob Wheeler.

“It wasn’t like I caught a bunch of those big ones,” said Christie. “It just happened to be five of the right ones and I got all of them in. To win, I’ve just got to keep making good decisions and fishing new water each day.”

Here's how the day-1 top 12 stacks up, with red numbers in parentheses indicating deficit margins from the leader:

The bite was strong as the lake continued to recover from a cold front earlier in the week – all but one of the 52 competitors brought a limit to the stage at Bon Secours Arena in Greenville, S.C. The lone exception was Skeet Reese, who continued to struggle in the sport's premier event since his victory in 2009.

Reese's sack wasn't short – it was non-existent. He got five bites but failed to catch a keeper.

"I had 100 percent confidence going into the day," said Reese, who's fared no better than 14th in the seven Classics since his triumph at the Red River. "I was as cool, calm and relaxed as I've been in quite awhile. I thought I was dialed in and I don't have a clue what changed.

"It is what it is and I don't have any regrets. I was fishing how I thought I could win."

Four-time Classic runner-up Aaron Martens was another competitor dealing with a high level of frustration. He incurred a two-pound penalty for making a cast with five fish in his livewell, which occurred after a fish had broken him off and he snagged the severed line with his next cast and hand-retrieved it to the boat. The excitement of the ordeal prompted him to take a short break to collect his thoughts, but he neglected to make the necessary cull before tossing his bait again.

More aggravation was in store for him at the weigh-in when his fish registered 16-02 on the scale – he was certain the four spotted bass on one largemouth would combine to weigh a couple pounds more than that. His penalty-reduced total of 14-02 left him in 17th place – one position behind four-time champion Kevin VanDam.
I usually low-ball my fish all the time and that freaks me out," he said. "They were all solid, fat fish. I've never felt this way before. I could see myself being off by a pound, but I'm distraught about this."

After a bright and sunny day 1, the skies will darken and some rain is a possibility for Saturday's second round. The field will be reduced to the top 25 after the weigh-in, with the winner determined Sunday based on highest three-day weight.

Christie In A Comfort Zone

Two years ago, Christie bagged 20-14 and found himself atop the Classic leaderboard at Grand Lake after day 1. He wound up being overtaken on the final day by Evers, who claimed the title. He’s hoping for a different outcome this time around.

When Christie was asked what he has to do to keep Evers in his rearview mirror this weekend, he smiled big.

And continue fishing clean, something that he did rather well on Friday as he landed all five of his biggest bass, including one in the 5-pound range.

He said he feels comfortable at Hartwell – he won an FLW Tour there in 2011 – and says the pattern he’s working on feels familiar.

He thinks he’ll need another strong bag tomorrow to keep himself in the hunt for the win Sunday.