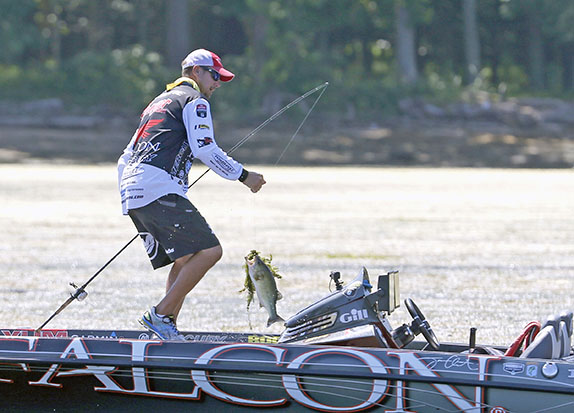 The proliferation of new grass up and down the Potomac River made for a challenging venue for last week’s Elite Series event near the nation’s capital. With all the fresh vegetation, the bass had so many more options and areas to ride out the summer.

It made practice a bit more of a task for the 107 Elite Series anglers, who tried to find areas with concentrations of fish that would bite consistently regardless of the tide cycle. That proved daunting and required most pros to move around and adjust with the rising and falling water. It also meant finding the right mix of grass in the right areas,

While winner Justin Lucas will be remembered for plucking 95 percent of his fish off a single piece of cover, i.e. the pilings and horizontal cross braces under a large parking deck, others had to rely on at least two locations to achieve the best outcomes.

Different areas required different techniques as well. Methodical flipping around hard cover was just as effective as working a vibrating jig around patchy grass or twitching a hollow-body frog across the surface.

As harsh and as hot as the weather was last week, the fishing at the Potomac was better than most expected based on reports that it’s been a fishery in decline, but it appears with the return of the green stuff, the green fish should thrive.

Here’s a rundown of how the rest of the Top 5 finishers caught their fish:

While some anglers remarked that moving water was key to how they were catching fish, Jason Christie needed clean water for his frog program to be effective.

“I fished according to the tide they wanted,” he said. “That medium to low tide was what I needed. I don’t think it mattered if it was coming or going, but it needed to stay clear. When it came in fast, it got muddied up. That bottom third of the tide and clear water were key for me.”

Coming off practice, Christie thought a weight in the upper 50-pound range might win.

“I had a terrible practice,” he said. “Based on my practice, I thought 30 might win.”

He said it didn’t occur to him to head north toward where Lucas fished because in a couple of his previous events there with the FLW Tour, that stretch of river was off limits.

“To me it didn’t make sense (to go up there), but that’s usually how Elite Series events are won,” he said. “Sometimes, it doesn’t make sense. I knew there were fish in that mid-river section, but how many times will it be won off a single dock? It just didn’t make a lot of sense to me.”

Instead, he hunkered down in Piscataway Creek and poked around a huge grass bed, eventually catching everything he weighed on a hollow-body frog, including a tournament-best 23-01 on the final day.

“The area I was fishing was so big that it was hard to cover that much ground flipping and punching,” he said. “I figured my chances were better to catch one with a frog, plus you can cover move water and it’s more fun.”

After catching 16-01 out of an area no bigger than a basketball court on day 1, he went back to the same spot on day 2, only to find additional competitors sitting where he wanted to fish. He eventually left and found the area he ultimately settled down on.

“I went there and fished and felt like it wouldn’t work,” he said. “Even as mad as I was, it pushed me out of that area, but it was for the best because it was like practice again. I started looking for the right grass and right tide and found a better area than where I’d been.”

He didn’t necessarily run the tide from the sense that he zipped up and down the river as the tide went out and came back in. He stayed in the same creek and let other variables dictate where he fished.

“It was different on every place, but I when I saw a mix of what I wanted – the right depth, grass, type of grass and water color – I knew I’d get bit,” he noted.

> Christie swapped the stock hook for a 4/0 Lazer TroKar frog hook due to some elbow pain that started to develop at the Cayuga Lake event in June. It’s something he’s never done, but it’s hard to argue with the results.

> He’s hoping some rest before the Mississippi River will help, but he fears he’ll have to have the same surgery that he had on his left elbow a few years ago. “It’s doing the same thing the other one did,” he added. “The last couple days, though, it was a little better.”

> Main factor in his success – “One thing I think I do well in tournaments that I don’t have a good practice is I go to an area and milk it for all it’s worth. The same exact thing happened at Dardanelle. I went to a spot hoping to catch a limit and ended up winning there. This one, it almost worked out that way. Some say it’s being stubborn, but I felt like every fish in the river lived in that creek.”

> Performance edge – “My Power-Poles were down so much this week. Guys talk about moving a lot during the day. On Thursday, I pulled in and put my poles down and sat for two hours. I moved 25 yards, then sat for another 2 hours. I moved another 25 yards and sat another 2 hours. That made a huge difference in how I was able to fish those areas.”